Pastrami, matzah balls and around the clock nostalgia 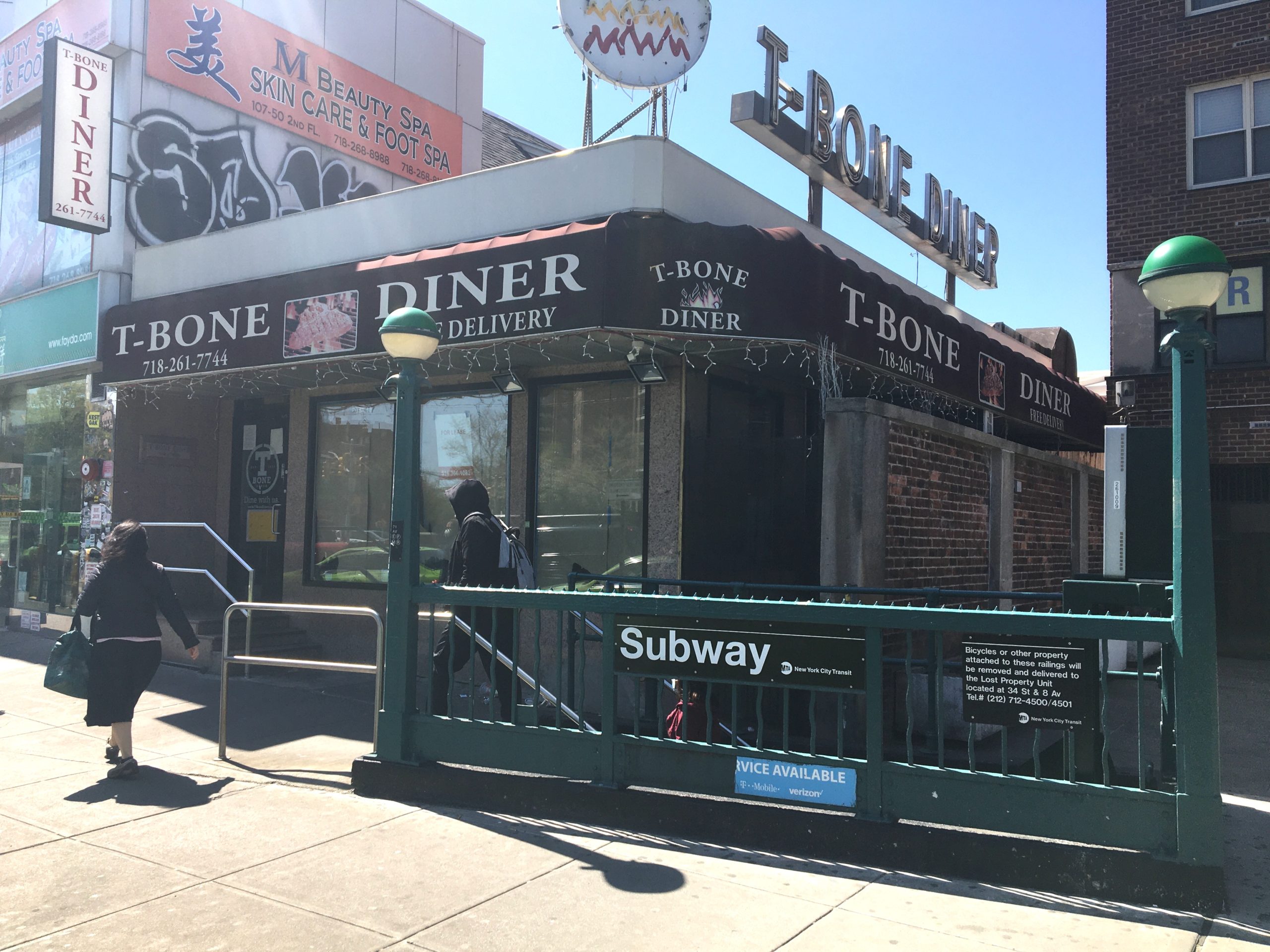 T-Bone with historic neon sign on its side, April 2022, photo by Michael Perlman.

One of Queens’ earliest freestanding diners will have a second lease on life.

The T-Bone Diner at 107-48 Queens Boulevard in Forest Hills, which shuttered last February, will reopen next summer or potentially sooner in spotless condition.

It will merge two classic concepts of Americana – a diner and a deli, and will be known as “T-Bone Diner & Delicatessen.”

It will operate as a kosher-style 24-hour establishment.

This columnist brokered a deal to rescue the historic T-Bone Diner by introducing A. Kumar, owner of nearby Jade Eatery and Lounge to Richard Jagusiak, the diner’s leasing agent, and helped defeat a plan to have a Popeyes location open in its place. “My endeavor is to keep our culture alive,” said Kumar, whose business partner is Glenn Reiner. “A main reason that I decided to reopen this diner was to serve our community, since there are not too many diners remaining in the neighborhood.”

He remembers the recent losses of the beloved Tower Diner and Shalimar Diner, in addition to delis of yesteryear, including Sandy’s Surf, Ben’s Best and King’s/Boulevard Delicatessen. Eyeing a meaningful and creative future for the T-Bone, Kumar explained, “Our menu highlights will be pastrami, matzo ball soup, and a 24-hour breakfast and the likes. We will be like Katz’s Deli. Our dress code for the staff would be a long skirt for the ladies, and men will wear fully white or black with a bowtie, just like the 1940s and 1950s.”

One of the T-Bone Diner’s major attractions is a circa 1950s-era Art Deco neon sign on the side, which will continue to illuminate upon Queens Boulevard in bright pink neon, but with the addition of the term “Delicatessen.” “The historic sign is a fantastic example of mid-20th century neon signage,” said David Barnett, co-founder of the New York Sign Museum and Noble Signs, who envisions restoring the authentic sign and adding to it in the same style.

“This sign is notable for the unique floating raceway mounting of the mill finish neon channel letters, and for the unique neon pictorial pan sign, which has a playful style that showcases the maker’s artistic sensibility,” he continued.

The front also had vintage signs, but those vanished several years ago and can be replicated.

T-Bone Diner in 1930 by NYC transit surveyors & circa 1940 by NYC Municipal Archives.

The T-Bone was prefabricated by the famed diner manufacturer, Kullman.

In 1930, an even more traditionally styled diner existed with “Seminole Grill” artfully stenciled on the base of each exposure.

Then in 1936, the IND subway entrance would be erected adjacent to the diner’s front entrance.

Today, a granite plaque near the front door reads, “T-Bone Diner, Since 1934.”

In its early days, it was known as The Boulevard Cafeteria, followed by the T-Bone Tudor Grill in 1937.

According to historian Ron Marzlock, the diner’s name was based on Robert Grassi preparing a perfect-old world Florentine T-bone steak, which boosted traffic and earned it the reputation it needed. Afterall, this was the era of The Great Depression.

Early on, T-Bone Diner was also stenciled on the facades.

Over the decades, the T-Bone Diner underwent several renovations. Its most recent owners are fondly remembered as Peter and George Plevrites.

The T-Bone was frequented by many notables, including Abe Colman, who was nicknamed the “Jewish Tarzan” and “Hebrew Hercules,” and began achieving much success during the Great Depression.

Passing away at age 101 in 2007, he was recognized as the oldest professional wrestler worldwide.

In a 2018 interview, his niece, Miriam Bly, referenced the T-Bone Diner as his favorite stop.

“He loved steak and soup, and would eat two meals a day,” she recalled.

Another notable T-Bone patron was legendary rock photographer Neal Preston, who captured the “who’s who” of rock musicians.

After compiling the Sunday New York Times at a candy shop on Queens Boulevard and Continental Avenue, he could not resist a tradition of rewarding himself with cheeseburgers at the T-Bone Diner.

The T-Bone earned its spot on TV, as in the case of the 2003 “Regular Joe” comedy series on ABC.

Joe Binder was portrayed by Daniel Stern and Joanie Binder, portrayed by Kelly Karbaez, was his 18-year-old child who attended Queens College and worked at the T-Bone to support her daughter, Zoe.

The demand for a diner and deli is high, according to patrons who are current and past residents. “I wish we had another kosher deli or diner in the neighborhood,” a resident named Sandra Martin said. “We used to go to Ben’s Best while my parents were alive, and we enjoyed it.”

The T-Bone was a go-to place for Forest Hills Inn Board President George Hoban, who would come home late from the airport after a business trip. “It was comforting to know that I could get a great meal and friendly staff at any hour,” he said. He also misses Ben’s Best. “I loved the hot dogs, knishes and sandwiches. The kosher style delicatessen is almost a rite of passage for any New Yorker and it’s a sin that our neighborhood no longer has that option.”

Diner expert Riley Arthur of San Diego, California, captured the broad picture of the NYC diner culture on Instagram; @dinersofnyc and February will mark the seven years of photographing them.

“In that time, 99 diners have closed, never to reopen, but a handful closed and reopened by brave new owners. Queens lost 28 diners, second only to Manhattan in fastest rate of diner loss,” she explained. “Gentrification and rising rents are the two largest factors, although the pandemic resulted in a steady rise to their closure.”

She considers diners and delis to be “pillars of the community.” “Maybe their food reminds them of home cooking. I’ve seen diner owners give cups of coffee to the homeless on multiple occasions. This is a place where people can sit for hours and be welcomed, eat alone, or their kids can do homework at the booths or patrons can have a safe first date,” Arthur added.

She felt that the T-Bone offered all the ambiance to be desired in a diner, consisting of frosted windows bearing its name, deep blue and white booths and a welcoming sit-up counter overlooking an open grill, where you can keep an eye on your eggs and potatoes.

“There was colorful lighting and a cozy atmosphere. The cooks wore classic paper soda jerk hats. Ironically, food is always secondary to the diner experience for me, but if you wanted an authentic diner meal, their menu delivered,” she said.

Stu Mazlish may be a Richmond, Virginia resident, but he left his heart in Forest Hills.

“After a ceremony at Forest Hills Jewish Center, my father took our family to the T-Bone for lunch. I must have been around six and ordered a slice of blackout cake, which was bigger than life,” he reminisced.

The personalization factor and ambiance of delis also cannot be beat. For Sandy’s Surf, he said, “All I can remember was the smell that is amazing to this day, and how Sandy was so nice to my mother and I. He gave a free hot dog after showing him my report card. Every Friday, my father gave me a dollar to buy a loaf of rye bread sliced from Jay Dee Bakery to go with the deli from Ben’s Best.”

The T-Bone was one of San Diego, California resident Pete Attardo’s most frequented stops, and he remembers how the landmark always seemed to be open and welcoming. “There was a counter man by the grill, whose name I believe was Spiro. He was good-natured and always willing to laugh at our shenanigans. I used to go with my dad on many afternoons and get their open-faced turkey meal with mashed potatoes and gravy,” Attardo said.

“In later years, I would take my wife and kids, and especially my youngest son would enjoy it. Every one of my friends who left Forest Hills would make it a point to hit the T-Bone on their trips home.”

Fifteen-year Forest Hills resident Lindsey Nicholson, who admired the T-Bone’s retro appearance with its neon sign, said, “I love a good diner and the fact that you can get a large variety of food. My partner and I loved the Shalimar on 63rd Drive and the ‘50s feel of UJ’s on 71st Road. Tower Diner on 66th Road was one of our favorites too. Diners are a much-needed option, since they offer breakfast all day and are casual.”

Forest Hills resident, Jeffrey Carrasquillo, lived next door at Lane Towers. T-Bone was his go-to for a quality meal after a long day of work.

He describes the establishment as “more than a restaurant” and a “place of socialization” where particularly the elderly and single folks could talk about current events and holidays.

He feels the same holds true for Jewish delis.

“The restaurant staff became like family. You knew them by their first names and would chat,” he said. “Our neighborhood will never be the same again as more of these places are gone. Corporate restaurants don’t have that ambiance.” This adds to my earlier diner preservation victories, where Manhattan’s historic Moondance Diner and Cheyenne Diner were hoisted up and transported on a flatbed to Wyoming and Alabama, respectively, which led to the NY Observer assigning the nickname “Diner Man.” – Michael Perlman